On November 3, the Ford government passed legislation that pre-emptively denies tens of thousands of workers in this province their Charter protected right to bargain collectively and to withdraw their labour. It is not an overstatement that this moment is a harbinger of things to come for all workers in this province, whether they are unionized or not. The Minister of Education Stephen Lecce and the Premier will attempt to convince Ontarians, primarily parents, that this Charter right-denying legislation is putting kids first. If there is anything we should have learned since 2018 is that Doug Ford and his sycophants lie.

The President of the Sudbury & District Labour Council (SDLC), is asking our local elected leaders for two things. The first is to make financial contributions to a Go Fund Me initiative currently being undertaken to provide groceries and other necessities education workers who are defending our collective rights. The site is www.gofundme.com/f/grocery-funds-for-cupe-osbcu-education-workers.

Second, they’re asking all unions affiliated to the SDLC to send their members to the rallies being held outside Jamie West’s office located at 555 Barry Downe Rd. The rallies will be held until further notice from 8:00AM to 3:30PM. On November 4 and daily until further notice, we see many members of the community, including members of your union joining. We need to keep that momentum going. The SDLC is working on other initiatives to help support CUPE-OSBCU workers in this fight. If you’d like to work with us or have creative ideas, reach out at anytime. 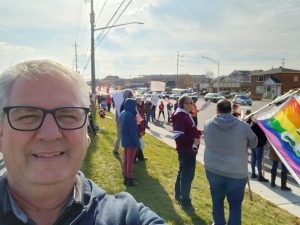